I recently went to LA and mostly stayed in Topanga Canyon, a village-like community nestled in the Santa Monica Mountains. While I was visiting, the cops found 5,000 tons of marijuana plants growing in Topanga State Park, probably not far from where we hiked that same morning. I don’t think anyone in Topanga was surprised, there’s kind of a green haze floating over the entire place. Maybe that’s why once you’re up there it’s hard to leave. When I did go down the hill, here are a few things that I would recommend doing (most of them scouted out in advance by my bff).

I love a man behind a bar with a husky voice and good arms. It’s all the more fitting when he’s serving me coffee in a tin cup in a restaurant that resembles an old western saloon. Old Place was converted from an old country store in the 1970s, and it feels like a time capsule in the middle of nowhere (or more specifically the Santa Monica Mountains). The beer tap in front of me was made with some kind of animal horn, country music played in the background, and the 20-foot bar runs parallel to a number of wooden booths hidden by their high partitions. The porch outside feels weathered. The food isn’t amazing, but it’s good and worth the experience. The granola comes in a giant bowl of fresh berries and melons, tasty almonds and pecans, and creamy yogurt, and it would easily serve three people. The fritata, which came out in a mini cast iron pan, was fine. The bacon was super thick, but wouldn’t cowboys want it that way? Go early to avoid a wait.

You have to walk down some steps, cross a slightly hairy bed of rocks, but it’s worth it. Point Dume is a quiet strip of beach past Malibu hidden by the dramatic cliffside above it— from the top all you see is blue waters and the view doesn’t change too much from the sand. There were a few wet dogs running around, a couple playing early 90s rock (could have been worse), but otherwise the crowd was minimal and low key.

$3 gets you in to this antique/flea market that doesn’t feel much different from any other antique market in California except that it’s smaller and more manageable, and amongst the booths of dyded cutoffs and costume jewelry there are actually some good deals.

Outside of the Trading Post is an ice cream truck, which isn’t normally my thing, but I was hot and the bullshit green juice I had at some pristine salon-looking juice shop wasn’t satisfying me. The gluten free coconut almond cookie was chewy and soft but held up well as I ungracefully munched my way to the chocolate cointrea ice cream.

Get some sample dresses at Shopaholic Sample Sales
This one is for the ladies. Find beautiful, affordable, samples from a range of designers. They had a huge selection of dresses from formal to casual, and some great leggings and casual tops. It’s a small store so it’s not so overwhelming, but every time I went back to the rack I was damned to find something new. The dressing room is one big shared room, so remember to wear cute underwear.

Old Place, get there early
Point Dume There’s a sign and a small parking lot on top of a cliff, best to park in the residential area. This should get you there.
Melrose Trading Post , Sundays from 9-5, $3 entry
Coolhaus , Follow on Twitter for locations
Shopaholic Sample Sales

A good guide is one who picks you up from the airport and says,”You hungry? Great, I know delicious Thai place. It’s a total dive.”

The thing I love about a 12-hour trip is that you have a very short window to have a bad meal. Couple it with a cousin that knows how to eat and you’re bound to have two great meals like this: 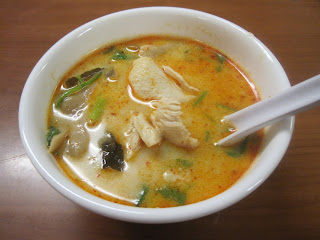 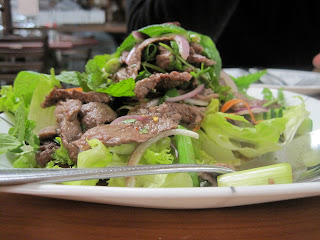 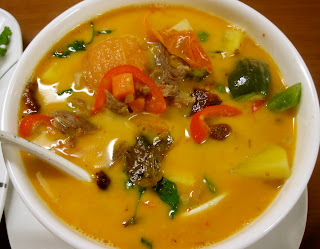 Dinner: Sri Siam Cafe makes a duck curry that melts in your mouth- pineapple, peppers, whole tomatoes and perfectly cooked duck. A Tom Kha Gai with some heat, a beef salad to cool you off, and a Sapporo to wash it down. Here the owner runs out in his chef’s coat to make a delivery, there’s neatly written Thai script on the whiteboard (OK, I don’t know what messy Thai script looks like), the “mild” means “damn spicy,” and you can bring your own beer in from the liquor store next door. A chill and authentic lil dive.
Breakfast:  If the bacon waffle I had in NY and Jumpin Java’s Cinnamon-Kiss French Toast had to get in the ring together and battle it out for fattiest fat girl breakfast, I’m not sure who would win. The baguette is dipped in brandy egg batter and glazed in sugar and cinnamon, towered on top of caramelized bananas and walnuts, and showered with powdered sugar. I’ve never put aside a cup of butter and a bottle of syrup so immediately. 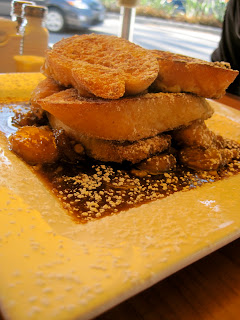 Jumpin Java is a pleasant throw back- The faded green and yellow color scheme hints at their 15 year history and so does the genuine friendliness of their servers. They’re nice, but not overly nice- cause they know you’ll wander back. 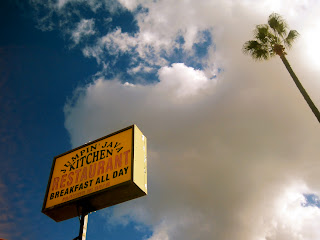 Oh! And if it’s a sunny day you can sit outside and then head over to the farmer’s market just two blocks down.

Boutique, comfortable and affordable hotels in Mexico. Find a Hotel

Doin so much social media consulting these days I

New article up on Life & Thyme as part of a series

Been resisting social media, submitting to water a

New piece up on the women behind the Black Chef Mo

Tres Colibrí is a cooperative owned by eight fam

‪Hey friends, the origin of this social media ch

Oakland friends, @tacososcar is back with takeout